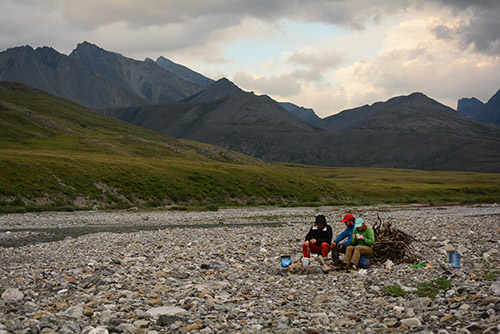 Sitting down for dinner in the Anaktuvuk River Valley.

Brett: "Snow Peak is known for making elegant and beautiful titanium cooksets, and the Trek 1400 is no exception. At just 7.4 ounces, the 1400 cooks for two and doesn't break the bank or your back. However, the crisp visual appeal of the 1400 hides two major flaws that might push the consumer to other high-end cooksets. First, the fold-away handle on the lid/skillet of the cookset is flimsy, unstable, and folds in such a direction that too much weight in the skillet can cause it to collapse and spill your food onto the ground. This happened twice during our expedition, and cost me a serving of peanut-rice both times. Second, the measurements etched into the interior of the pot are in increments of five and ten, which is of little use to someone measuring in units of cups (i.e. 4 or 8 ounce increments). Although it is a small annoyance, such a feature should have been better conceived on a high-end cookset.

Still, it's hard to ask for everything when you're roughing it. The slimness of titanium allows it to transmit heat quickly. Titanium also has no metallic taste and does not rust. Snowpeak designs all its cooksets to hold a fuel canister and a stove, which makes these sets efficient in the backcountry. With a few improvements on part of snow-peak, or a few modifications on part of the user, this is a functional, high-end cookset with a few pesky quirks."

Paxson: "Brett's a little more forgiving than me with this cookset. As he points out, the pan is actually designed so that it flips downward from the handle, which causes it to unexpectedly dump the contents of the pan toward the ground. This becomes even more of a problem the fuller the pan is--exactly when you don't want it to disassemble itself. We were luckily to only lose a couple portions to this obvious defect. If the pan flipped down when it was filled with boiling water or hot oil, spilling it into an unlucky cook's lap, it could cause serious injury in the backcountry. This cookset needs to be fixed to ensure better performance and basic safety.

Update: I've since had a chance to try another one of these pans, with vastly better results. With the second pan, no amount of pressure would force the pan to flip down, as the handle comes in firm contact with the attachment mechanism, which keeps it from slipping. My hunch is that we got a lemon. When this pan is working properly, it seems to be more than up to the task."