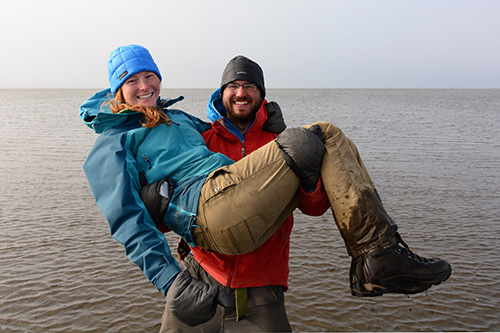 Chelsea and Brett sporting their Black Rock Gear down hats at the edge of the Arctic Ocean.

Chelsea: "Worn for a good portion of the trip. Super cozy, and so light you never noticed it was on. Survived many a light-misting, and plenty compact to fit under a rain jacket when the weather got worse. No complaints."

Paxson: "I have to admit I was skeptical when Brett and Chelsea told me that we'd received a sponsorship from Black Rock Gear. We were going to be spending weeks in an extremely remote, cold, wet environment, and trusting our gear was vitally important. A down hat? Who'd ever heard of such a thing? Would it be warm enough? Would it breathe? What about rain? I decided to bring it, but only as a complement to my trusty heavy wool hat.

Well, after our pre-expedition shakedown trip on Twentymile River, I made the decision to leave my wool hat at home. These are awesome little hats. And yes, little is the right word: at between 18.5 and 22 grams, Black Rock Gear down hats are both insanely light and insanely packable, scrunching down small enough to fit in a key pocket. But put them on your head and give them a few minutes to loft, and the premium-quality 900-loft goose down quickly expands and bathes your head in a soft bubble of warmth. The outer material will shed light rain and splashes well, and we stayed warm even through a few serious Arctic rainstorms. The hats breathe surprisingly well, easily as well as my wool hats. The biggest downside to this hat is that you need to watch it when you take it off--it's light enough to blow away in a breeze. I prefer the cleaner styling of the "Original" hat.

Black Rock Gear is all handmade in Seattle, Washington. They are a pretty niche company: their advertising seems to be primarily through word of mouth, and they don't even have a Facebook page. They seem to be a small company focusing all of their energy on making a fantastic product, and there's no doubt in my mind that they're succeeding. While the hats are not cheap, they're also among the coolest outdoor gear I've found recently and were a continuing source of awesomeness on Expedition Arguk."

Sponsorship Note: Black Rock Gear provided Expedition Arguk with five down hats, with no strings attached. This review was written independently by members of Expedition Arguk.