Paxson: "When we were still in the early phases of trip planning, Brett called Alpacka to ask about the possibility of a sponsorship. They patiently listened to his pitch and then said, in so many words: 'It sounds like a great trip, but you're going to buy our packrafts anyway, and you're going to make a bunch of media showing how awesome our boats are.' Well, damn. Of course, they were right. Though a number of other companies have dipped their toes into packraft production, nobody currently has the reputation or specs of an Alpacka raft. 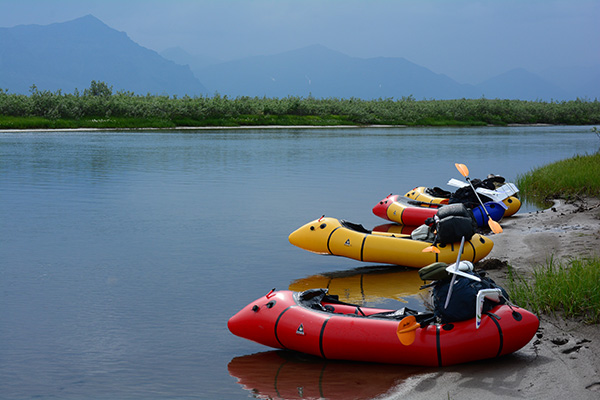 Our fleet of Alpacka rafts on the Anaktuvuk River

Founded in 2001 by Sheri Tingey in Chugiak, Alaska, Alpacka's goal was to build the ultimate Alaska wilderness boat: an ultralight, ultraportable, and durable river raft that could safely run remote whitewater and could also be rolled up and stowed in a backpack. While they weren't the first to build small inflatible boats, Alpacka was the first to successfully build a boat that could hold up to Alaska's demanding environment. Early adoptees such as Roman Dial and Dick Griffith hung up their old military-surplus boats and reporposed pool toys and popularized Alpackas with epic adventures in Alaska's wilderness. Hig Higman and Erin McKittrick proved their phenomenal durability with a 4,000-mile journey from Seattle to the Aleutian Islands, even using the boats as sleds during the winter.

As of 2013, Alpacka Rafts are hand-made in Mancos, CO out of premium-quality urethane-coated nylon. The Yukon Yak, their most popular mid-size boat, weighs under five pounds and rolls down to the size of a 2-person tent. Rafts are available in single colors or with custom color schemes (Paxson: "yellow" Brett: "red" Jason: "give me the ugliest thing you have"). There are two types of spray decks, a lightweight "cruiser" deck that keeps most water out of the boats and can be zipped off, and a "whitewater" deck that keeps almost all water out of the boat but is slightly heavier and can't zip off. The boats have a beautiful, slightly rough-edged handmade quality that reminds me more of a tailor-made suit than a piece of outdoor equipment.

During Expedition Arguk, we relied on four Alpacka packrafts purchased from our sponsor Northern Alaska Packrafts to take us approximately 245 miles through the Alaskan Arctic, meaning that we put a combined total of 980 miles on our rafts. We never went easy on the ultralight boats; on the shallow Anaktuvuk River, we repeatedly "butt-grinded" over river rocks in less than two inches of water, and even pushed the boats with our paddles (or hands) over rocks that broke the water's surface. The only damage we incurred happened when one member of the team left a heavy rock under his seat, placed there to weigh the boats down during a storm at camp, which caused the floor to grind between rocks for half a day and develop small holes. Where the Anaktuvuk was deeper, the highly-maneuverable rafts joyfully handled the choppy, wild, roller-coaster twists and turns of the river. The boats are surprisingly durable and fun, fun, fun.

Brett's packraft on the Anaktuvuk, with the "fat butt" elongated stern in the foreground. This new design feature improves tracking and balance.

As with any boat, there are inevitable compromises. The short, wide design that makes them maneuverable, buoyant, and light also makes them slow relative to other hand-powered watercraft. While a sea kayak can cruise at 5 or 6 miles an hour, an Alpacka raft cruises closer to 2, beyond which increased effort results in rapidly diminishing returns. Furthermore, wind will eagerly push the broad-tubed boat around, especially with a pack strapped to the front. Paddling the slow, flat sections of the lower Colville could be sublime and peaceful, but when the Arctic wind picked up, creating little whitecaps of upriver waves, things got tough. In an especially strong wind, we had to fight to make it across the river, where we deflated our boats and simply hiked along the shore (to be fair, you couldn't do that with a sea kayak). While the boats do track surprisingly well, partially due to the new elongated stern design, Alpacka rafts are, at heart, river boats. In the ocean, a strong, sudden wind could push even the most capable paddler out to sea.

We also experienced some minor construction defects. Several of the smaller air compartments on our boats, which are made of a much lighter material than the main tubes, leaked. The back rest in Jason's boat, and the inflated pouch on my spray skirt, both had to be topped up every few hours. Other small compartments leaked more slowly. The cinch on my spray skirt fell off on the first day and disappeared. I would also recommend immediately tying the main air valve onto one of the grab hooks with a strong knot.

These issues, however, shouldn't detract from how revolutionary, well-made, and playfully awesome these boats are. There may come a day when one of the big outdoor companies finally figures out how to make a foreign-made, mass-produced, cost-competitive ultralight wilderness raft. In one sense that would be a great, since it would open up this wild sport, once the sole province of grizzled wilderness crazies, to more people. But in another, it would be a loss; Alpacka rafts have an out-there, hand-made, experimental off-the-wallness that is almost as much a part of the packrafting scene as the water itself. Alpacka did it first, and for now, Alpacka does it best." 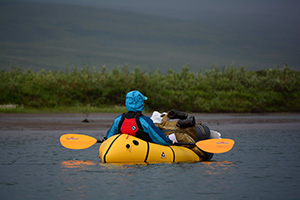 Chelsea in her yellow Alpacka Yukon Yak on the Anaktuvuk River

Chelsea: "I had never heard of a 'packraft' before, when we started to decide on the details of this trip. I've spent time on almost every other water vessel there is, from sailboat to ferry to kayak, but this would was a new experience for me. I wasn't hard to convince. When our boats came in the mail, we had to blow them up in our basement right away and check them out. I was sold. Since then, my yellow Yukon Yak has been on the Clark Fork (CII-III, in Alberton Gorge) (MT), the Bitterroot (MT), the Yellowstone (MT), Lake Coeur d'Alene (ID), 20-mile (AK) and finally the Anaktuvuk and Colville of the North Slope. (Throughout Expedition Arguk we brainstormed the top 10 places in the world we'd take our packrafts next).

The stability of the boat for its size and weight is phenomenal, but as a bit of a whitewater solo rookie I still flipped three times the first time I took it in big water. The minimal depth these boats run was perfect for the Anaktuvuk when we ran it. Had the packrafts run any deeper, we would have been doing a TON more walking. As it was we bumped over a bunch of river rocks, with almost no damage. Unfortunately, this same characteristic keeps them from being any form of speedy on flat water, but every piece of equipment has its unique function. I got a very small puncture in my raft, and it was easily remedied with Tyvek tape (thank you Northern AK Packrafts!) that lasted the whole 2 weeks on the water. Previous to Arguk and relevant to this review, Brett and I have both brought my older chocolate Lab along on some of our shorter trips in our packrafts. She fits relatively comfortably on the floor, without hindering the leverage of the legs. All told, I look forward to many more years and trips with this boat!"